The problem of decentralized namespaces has long been recognized as an important one. The three desirable properties namely security, human-meaningful names, and decentralization form a trilemma in the context of network protocols and is known as Zooko’s triangle. Until blockchain (Bitcoin) came along, designing a system that exhibited all three was conjectured to be impossible.

Other specialized solutions such as Namecoin required explicit consensus rules to enforce uniqueness of names but inherently lacked economic security and thus limited to merge mining (with Bitcoin). Other native decentralized naming solutions have been developed for public blockchains that offer global state (Ethereum), but unfortunately the underlying Layer-1 does not scale well. Allegory protocol as described in this paper is the first and only solution that is designed to natively work on Bitcoin's highly scalable UTxO model without needing the slightest change to the Bitcoin protocol. AllPay is an application protocol which builds on the underlying Allegory protocol to offer user friendly self-sovereign payment addressing.

Allegory is an application protocol that works supplementary to the existing Bitcoin protocol, and does not demand a Bitcoin consensus change (no hard/soft-fork). Also the protocol allows efficient SPV based name resolution (Simplified Name Verification) in the absence of a trusted full node, which is an important requirement for the widespread adoption of any naming protocol.

The Allegory protocol is set in motion by a single genesis transaction, just another ordinary Tx for Bitcoin, but a pivotal one for Allegory protocol . All the Allegory naming protocol system participants, which include light (SPV) clients, name lookup nodes, name resellers/miners etc will recognise the genesis transaction, moreover the reference server & client software will be open-sourced on an OpenBSV type license, which grants essential freedom for the ecosystem to adopt while protecting unethical imitation.

The fundamental underpinning of the Allegory protocol is the name-UTXO (nUTXO). A nUTXO is just a regular UTXO with additional name property bestowed upon it discernable by the higher layer Allegory protocol.

A nUTXO can be spent (effectively transferring the name) towards other Bitcoin addresses just like a regular UTXO, but it comes with certain additional implicit properties. 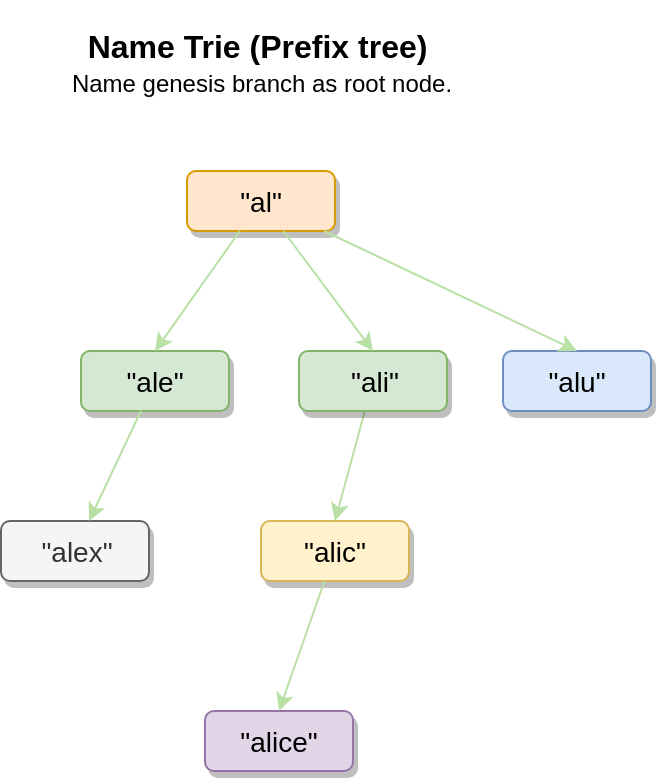 A nUTXO spending transaction can produce the following derivatives under given conditions:

The transaction is expected to contain an accompanying OP_RETURN output (unspendable with 0-value), which has encoded metadata containing the name operation privileges and corresponding references to the transaction's inputs & outputs, along with certain other ancillary information.

The naming system & the OP_RETURN template specification is as below.

A namespace is a group of related elements that each have a unique name or identifier. A namespace ensures that all the identifiers within it have unique names so that they can be easily identified without name conflicts. A namespace-identifier is used to indicate namespaces to be exclusively used for a given application.

Each element within a namespace has a local name that serves as a unique identifier. The namespace identifier is separated from the local name by a '/' (forward slash) delimiter.

For instance if an user named Alice decides to obtain an unique name 'alice' for AllPay use, her fully qualified AllPay handle will be ap/alice

Allegory Version 1.0, allows names (or namespace) to be extended by one level at a time i.e. in a single transaction. Although, under a single level extension rule, multiple child code-point (character) extensions can be added to a given parent atomically. Multi-level names can be generated trivially by chaining transactions, the rationale behind is to keep the protocol logic simple and robust. While in future protocol spec revisions multilevel support can be added.

The above naming system is merely a convention and not a protocol rule. The protocol itself directly deals with names as arbitrary strings (Unicode code-points) and hence remains oblivious to namespace-ids & separators (in fact these are optional).

Namespaces are created organically with the same fundamental protocol rules, and no special treatment is needed/given for namespaces (as compared to local-names) within the base protocol. So merely generating a namespace identifier (sequence of code-points) followed by the '/' (forward slash) delimiter qualifies as a valid namespace prefix which can now contain unique local names under it.

Allegory aims to be globally adopted across languages, applications and platforms, it leverages the Unicode Standard to support internationalization. Unicode can be very complex in principle as it attempts to address different notions of a character with constructs such as code-unit, code-point, character-sequence and grapheme clusters. Allegory has a simplified approach to adopting the Unicode standard without delving into the semantics of the different language constructs. Allegory only recognizes code-points⮵, and strictly permits the name extension based on code-point units alone. It does not attempt to discern or validate the grapheme or character sequences which are recognized by other human interface applications.

The name and code-point fields can hold Unicode values. Allegory only recognizes Unicode code-points and no higher constructs, hence the characters/code-points are represented in HTML entities as 'Numeric character references'.

The Allegory meta-data contained in the OP_RETURN (index-0 output) is YAML encoded, the content can undergo simple ASCII encoding, without affecting the Unicode numeric character references⮵ contained within. As a side effect a user could legitimately obtain an Allegory name that is otherwise invalid (syntactically) in the real world. However, this does not affect functionality or security in any way.

The naming protocol is fundamentally case-sensitive. Although the Unicode standard contains explicit labelling of code-points as upper or lower case, no automatic case mapping from lower-> uppercase or vice-versa is allowed in Allegory. The case-folding feature of the Unicode standard is also omitted. Although, the individual namespaces may explicitly choose to follow case-insensitive naming, clients for such applications/namespaces would be expected to limit use of a particular case. e.g. AllPay wallets would disallow names containing upper-case characters (typical in Latin & Cyrillic scripts). This flexible design allows the base protocol to remain agnostic to casing constraints and remains simple and intuitive.

Note: The below template is shown in YAML format for readability purpose, but the actual data encoding will be in CBOR (binary) format.

The nUTXOs should hold value above the dust threshold so its accepted by miners. Although nUTXOs serve the naming function and not primarily meant to store 'value' they could still hold arbitrarily large number of Satoshis. Also, nUTXOs can be combined with plain UTXOs to produce one or more nUTXOs, this could be useful if a parent nUTXO does not currently hold enough Satoshis to spawn required children.

A nUTXO's perceived market value comes from its implicit name/keyword association and it typically holds insignificant/minimal Satoshi value. The marketplace would need a mechanism to seamlessly exchange such nUTXOs with relatively higher value plain UTXOs (with no name) with no counterparty risk. This can be achieved on-chain by atomic swaps, where the buyer and seller draft a transaction mutually with signed inputs from both parties and the agreed outputs, this transaction when broadcast and eventually accepted in a block atomically commits the trade.

Allegory allows SPV name resolution wherein the SPV clients can resolve names independently without having to trust a 3rd party name lookup node, or even having to query multiple such nodes to reduce risk of fraud. This involves validating the chain of signatures leading from the name-genesis TXO to the appropriate node/position in the nTXO Trie. Since the SPV client lacks the full set of blocks & transactions the name lookup node would have to assist SPVs with the Merkle path for validating each of the internal UTXO nodes in the Trie. Although SPV name validation involves relatively higher processing complexity than a traditional transaction validation, this is typically done only once while adding a recipient in the wallet or when buying /acquiring a name for use.

SPV clients/wallets with Allegory protocol functionality will incorporate a marketplace to buy/register names, and to lookup potential recipients based on their user friendly names. More importantly they need to have the additional naming logic to be prudent about correct usage of nUTXOs, as basic wallets could unwittingly mistake nUTXOs to dust UTXOs. To prevent accidental misuse of nUTXOs, it is recommended clients use non-standard key-derivation paths (BIP44, BIP32) for address generation, it could either use a reserved 'account' index like m/44'/0'/509' or they could opt for an exclusive 'coin_type' such as m/44'/509'/1'